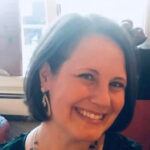 Shannon has been working in direct nursing support of women and infants in a variety of capacities for the past 20 years. She earned her BSN in 1999 through Marquette University on an Army ROTC scholarship. After that, she served for 5 years in several locations on active duty in the Army Nurse Corps, specializing in OB/GYN Nursing.  She then moved to Washington, D.C. and the Annapolis areas and worked as a Labor and Delivery Nurse, Postpartum and Newborn Nurse, and Lactation Consultant at Sibley Memorial Hospital, Walter Reed National Military Medical Center at Bethesda and Anne Arundel Medical Center. Shannon currently works on the GYN/OB Lead Clinical Nurse team at The Johns Hopkins Hospital in Baltimore. She takes special interest in and is participating on projects related to healthcare disparities and healthcare provider implicit bias. She began serving as the AWHONN Chapter leader for Anne Arundel in 2019 and is grateful for AWHONN experiences, such as AWHONN on the Hill – an AWHONN lobby day on Capitol Hill– which she attended twice in recent years. She is projected to complete her MSN in Public Health Nursing in February of 2021 through Walden University and currently lives in Crofton with her husband and their four children.  Contact Shannon at this link.